Ripped. Well ripped…
And a well-ripped body is something we don’t just appreciate, we actually look up to it.  And put a sky-high level of hotness in there and we worship it (yeah ’cause not all ripped bods are hot).

This, guys, is Michelle Lewin.  She is said to hold the title, ‘social media’s most popular fitness queen’.  Her sculptured body garnered 12.3 million followers on Instagram… and heck, even celebrities are fans o’ hers (like Jada Smith for example).  But this Venezuelan fitness star never had it that easy.  You see, she came from really humble beginnings.  She never knew her biological dad and her mom and stepdad separated when she was only 14, leaving just the two of ’em (with nothing much).

Michelle explained that most of the time (then), she could not afford to eat and during her teens, she weighed only as little as 85lbs and was always sick.  The 5 foot 4-inch teen used to hide her body under baggy clothing and she says shes was always cheated on by her boyfriends.

And although she is only 5’4″, that didn’t stop her from trying to get inside the fashion world.  She traveled to Rome, Barcelona, and Milan to talk to fashion agencies and according to her, “they were plain mean.”  They were disgusted by the freckles on her chest and she was told that she just gotta’ have it removed.  Now she’s famous, the agencies might still think it’s disgusting but she doesn’t care and she probably doesn’t give even the littlest of f*cks.

She’s happy that she doesn’t inspire young women to starve themselves.  You see, Lewin eats a very strict and clean diet consisting of carbs only in the morning, lean protein at lunch, and greens and veggies in the afternoon/dinner…  but on Sundays, man!  She can eat whatever she wants.  All the pizza and pasta she can get a hold of, according to her.

Michelle was married in 2010, by the way (so… sorry guys), to Jimmy Lewin.  Jimmy also became her trainer, agent, social media manager, and any other thing she needs (we’re thinking maybe even a bench press set).

This IFBB Bikini Pro wasn’t always this ripped.  With the help of her husband, Michelle transformed her body.  She lost the fat and gained muscles  In a few years time, she went from 145 pounds to a 120 muscled beauty.  Her current body measurements, 36-25-36, is a perfect hourglass (one that one needs to become a bikini model).

Michelle Lewin works hard for her body.  She trains twice per day and six days a week.  She does a 45-minute cardio every morning and she does weights in the evening.  She focuses on her glutes and abs (which she trains twice a week) and she does all the muscle groups once per week. Whew (the only exercise I can do is type on the keyboards)!!!

So there, this babe here should really be on a pedestal as she worked (and is still working) for it…

Now the pics.  Show it to your girlfriend or girl friends.  See if they, like the celebs, become inspired (to work out! Not to eat all pizza and pasta they could get a hold of).  (editor note: probably not good advice.  Keep these pictures to yourself, your girlfriend will not appreciate you showing them to her and comparing her to them) 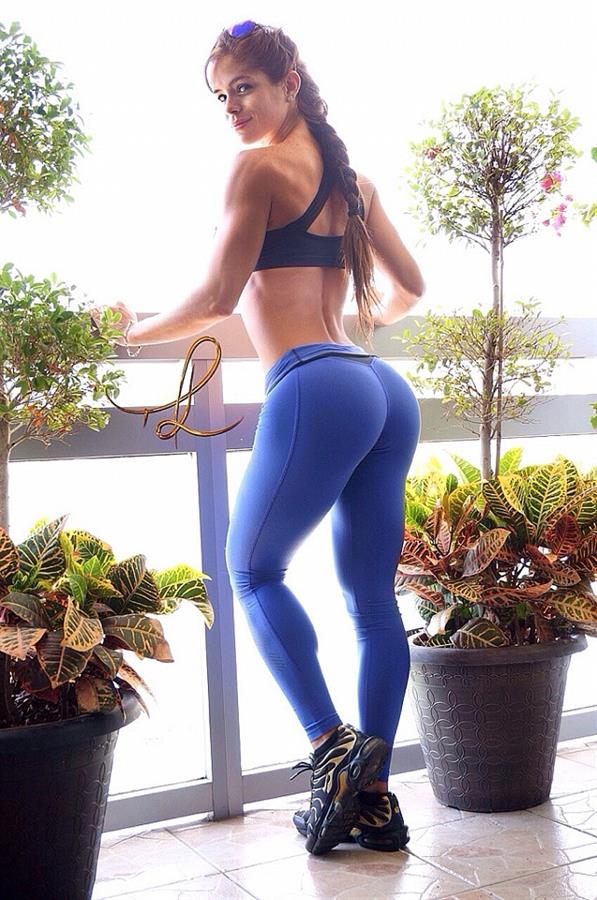