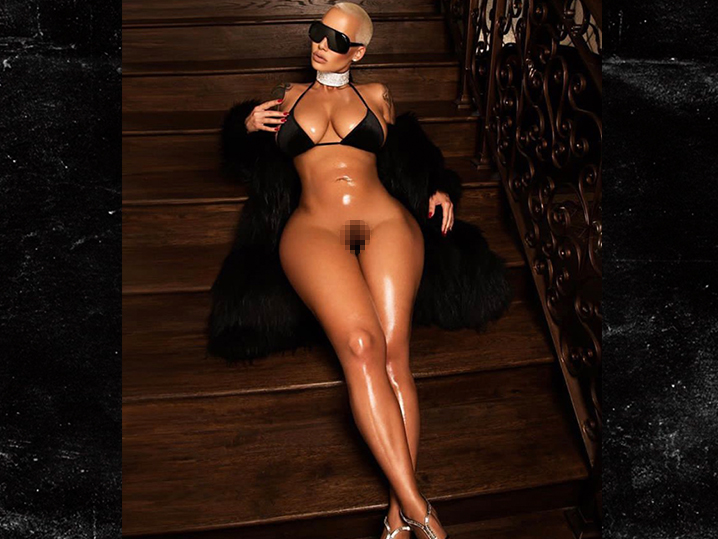 So this happened!  Amber Rose had gone wild as she exposed her vajayjay on fire.  It seemed that she forgot to wear her underwear or maybe hers was still at the lost and found of an undies section in a department store when she posed for a photo shoot to promote her annual Slutwalk.

The latter sounds odd yet in reality it is an advocacy, a feministic movement started by the thirty three year old model Amber Rose to give credits or salute to all women who are still standing on their feet after being demeaned or judged for their sexual behaviors.

Where on earth did it come from and what made her decide to create such movement?  According to Amber Rose, in an interview with Cosmopolitan, she was already slut shamed at an early age and this pushed her to create a movement for those who had the same experience. To promote the said movement on its  third year,  she showed off what other women can’t – her genitals covered with pubic hair.  It was not new to her – to slay the online world with her hot and naked body. However, exposing her genitals to the public, is a step too far.  Yes, she is an advocate of feminism and admired for her approach, yet what she recently did surprised everyone.  It did actually made a storm online.  She was a bomb that suddenly exploded on social media platforms.

The said photo circulated rapidly on social media platforms Twitter and Instagram. Well, the promotion garnered several likes and of course, if only these social media platforms have this what you call “dislike button”, bet that these social sites would crash down due to “click” traffic if there is such a thing or if someone took the time and cared enough to create such button.

Many reacted negatively, but come on people, this was not even the first time that a model showed off her lady V on Instagram, Twitter, Facebook or in any other social media platform.  Besides it’s for a good cause, so why rant? Here’s a few.  Followers of Amber Rose on Twitter wrote:

‘She got more hair on her p**** then she does on her head
‘Man you need a chainsaw you shave that bush,’

Nietizens also show concern and worry for the model’s son as they commented on the photo.

Another one added ”Her son will see this one day!’

Hours later after she posed this photo of herself lying on the stairs while wearing a choker, black fur coat, black bikini top and literally bottomless , it was deleted on Instagram as it violated the social media’s terms.

Based on her response, many thought that she just don’t care at all. Amber Rose posted a frustrated video of herself with the caption