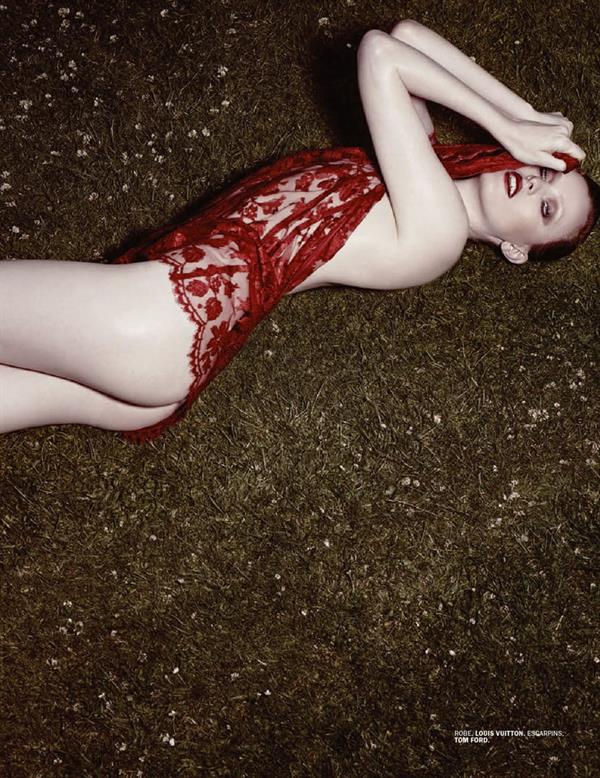 Okay, I’ll stop.  Now, how about we get to know her more…

Who Is Karen Elson?

Karen is an English fashion model and singer-songwriter (and aspiring DJ) who has shot with some of the most famous photographers of the contemporary age, including Bruce Weber, Mario Testino, Peter Lindbergh, Mert & Marcus, Steven Klein, Patrick Demarchelier, and Steven Meisel.  She established the political cabaret troupe called The Citizen’s Band. 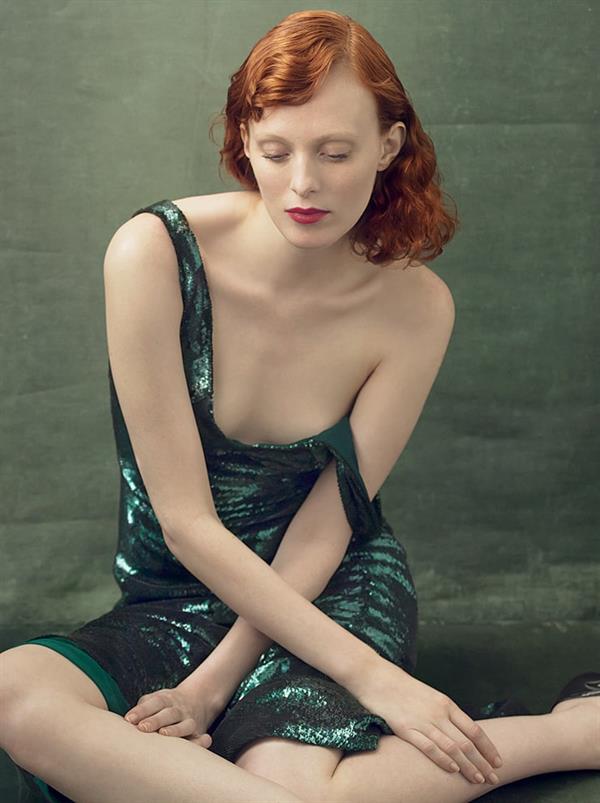 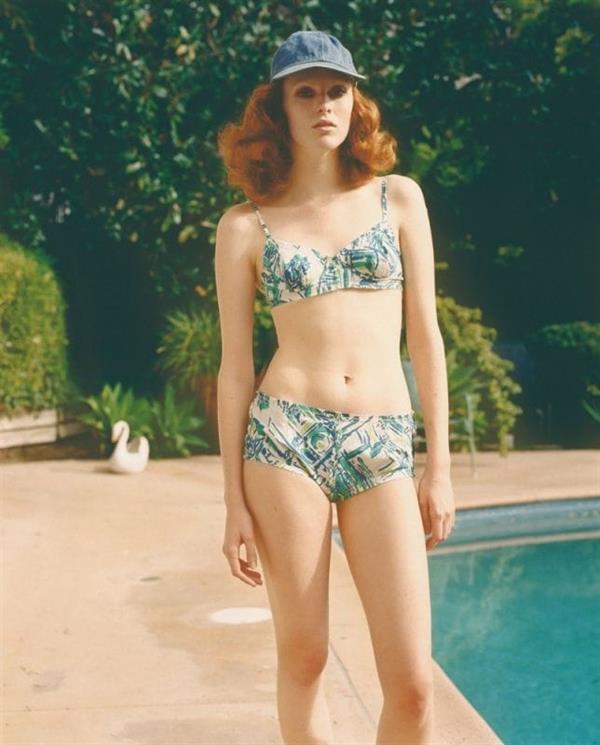 Karen was discovered at age 16 by Debra Burns, the owner of Boss Model Management in Manchester.  She began modeling locally and left Oldham a year later.  On her 18th birthday, she was featured on the cover of Italian vogue, thus launching her career worldwide.  Since then, she has over 30 magazine covers to her credit such as international editions of Vogue, W, Dazed & Confused, Numéro, Harper’s Bazaar (British), Marie Claire, Elle, Lula, Foam, and Nylon. In September 2008, Elson was on the cover of British Vogue as “Fashion’s Red Queen”.

In 1998, Karen won the title of Model of the Year at the VH1 Fashion Awards.  The September 2004 cover of American Vogue featured her as one of the “Models of the Moment” and in 2005, she won the British Fashion Award for Best Model. 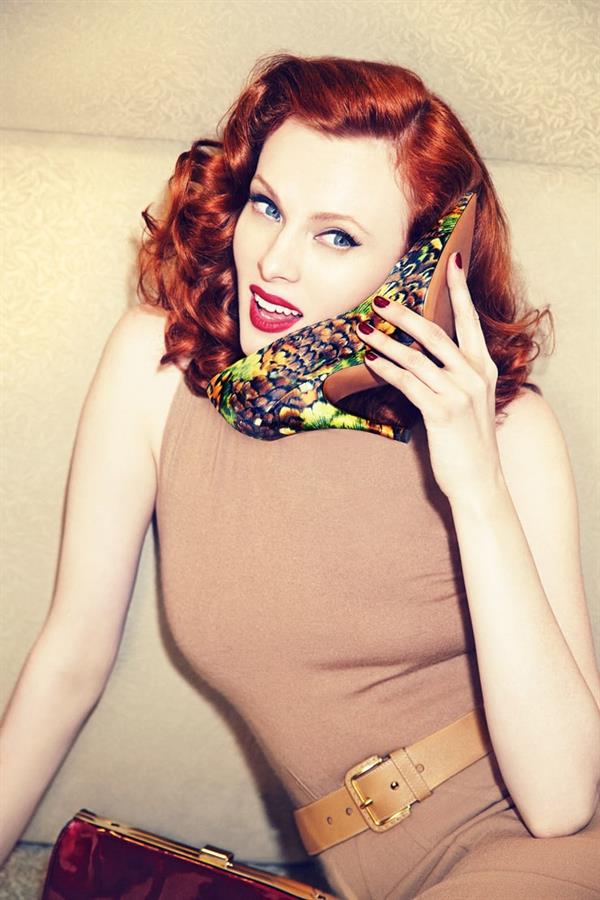 Karen also became the face of British department store John Lewis for autumn/winter 2008–09.  In the autumn of 2009, she appeared on billboards internationally for H&M.

Karen has appeared in many short films and videos, including the music video for the White Stripes song, “Blue Orchid”.  She acted in the short film Lay Down Lean, a project by the experimental filmmaking team Belles of the Black Diamond Field.  She has also appeared in fashion films: War Opera, Nick Knight’s Andy Warhol-inspired series More Beautiful Women, Craig McDean’s 48 Girls, and Bruce Weber’s Petit Fleur, Harlequin, Voodoo Daddy, Closer Walk With Thee and Karen’s Boogie (all films were made in conjunction with W as a tribute to New Orleans).

Karen is a founding member and performer with the New York-based political cabaret troupe The Citizens Band, appearing with them at various theatres as well as the downtown art gallery Deitch Projects since 2004.  As one of the leaders of the Citizens Band, she has performed a variety of songs including covers of the Velvet Underground, Kurt Weill, Elvis Presley, Mimi, and Richard Fariña, Pete Seeger, Leonard Cohen, Neil Young, and Marlene Dietrich.  She has also written and co-written songs for the troupe’s performances.

Karen’s musical career built slowly over the course of several years.  In 2003 she contributed backing vocals to a remix of Robert Plant’s “Last Time I Saw Her” from Plant’s album Dreamland.  In 2005, a personal recording of Elson singing “Coming Down” was made available on a CD accompanying the August 2005 issue of Uncut magazine.  The song was chosen by REM singer Michael Stipe.  She also sang a duet with Cat Power of “I Love You (Me Either)” for Monsieur Gainsbourg Revisited, a tribute album to French singer/songwriter Serge Gainsbourg.

Her first full-length album was written, for the most part, in secret without letting her then-husband Jack White hear what she was doing.  She released her debut solo album The Ghost Who Walks in May 2010, via White’s label, Third Man Records.  Spin magazine gave it 7/10 and compared her voice to both Jenny Lewis and Loretta Lynn.  In September of the same year, Karen and her band performed on the Late Show with David Letterman.

In September 2012, she was featured in a campaign called “30 Songs / 30 Days” to support Half the Sky: Turning Oppression into Opportunity for Women Worldwide, a multi-platform media project inspired by Nicholas Kristof and Sheryl WuDunn’s book.  Fringe included Elson’s song “The Ghost Who Walks” on their season 4 episode “A Better Human Being”. 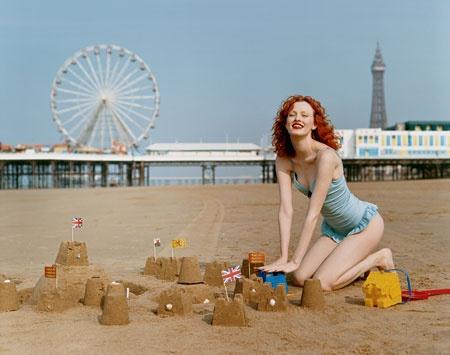 Her second solo album, Double Roses, was released in 2017.

Karen met ex-husband Jack White on the set of The White Stripes music video “Blue Orchid”.  The couple announced their intention to divorce in June 2011.  The divorce was finalized on November 26, 2013. They have two children, Scarlett Teresa (born May 2, 2006) and Henry Lee (born August 7, 2007).

Her modeling career got a boost when she became a favorite of photographer Steven Meisel and shaved off her eyebrows per his advice.

Karen has contributed to Nick Knight’s fashion site SHOWstudio.com since 2002. She also contributed to Knight’s project “Moving Fashion” with a black and white video of herself in a sequined gown, perched upon a swing.  The images were accompanied by Elson playing the autoharp and singing a verse of Marlene Dietrich’s “Falling in Love Again.” 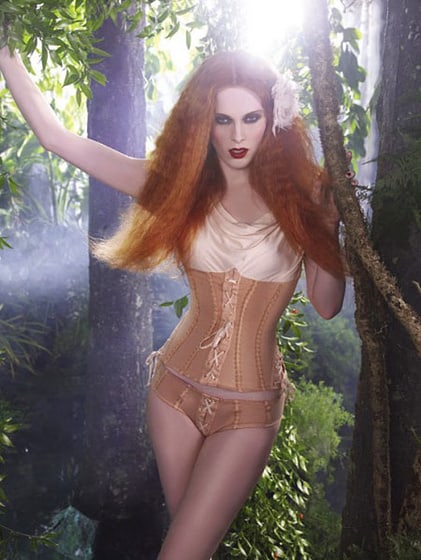 In 2010, she modeled a Patricia Field dress for the Sex and the City Archive in the Naomi Campbell‘s Fashion for Relief runway show for the White Ribbon Alliance, an organization aiding mothers in Haiti.

Karen has designed her own line of shoes, bags, and jewelry for fashion brand Nine West and was one of eight British models chosen to walk during a segment at the 2012 Summer Olympics closing ceremony.  She wore a gold gown by Burberry and walked the stadium with her fellow models to David Bowie‘s song “Fashion.”

Karen is an ambassador for Save the Children and has traveled to Sierra Leone, the Middle East, and the Ivory Coast. She has written numerous articles and appeared on CNN in regards to her advocacy for child rights. 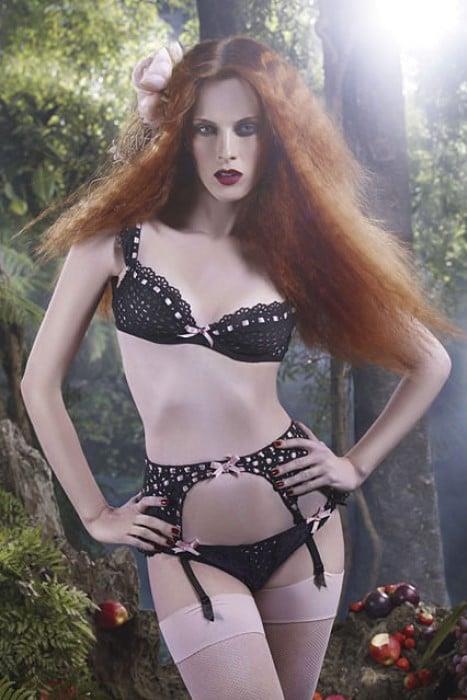 Follow Karen on Instagram for her newest personal posts.
Also, do visit our Karen Elson page for more of her pictures. 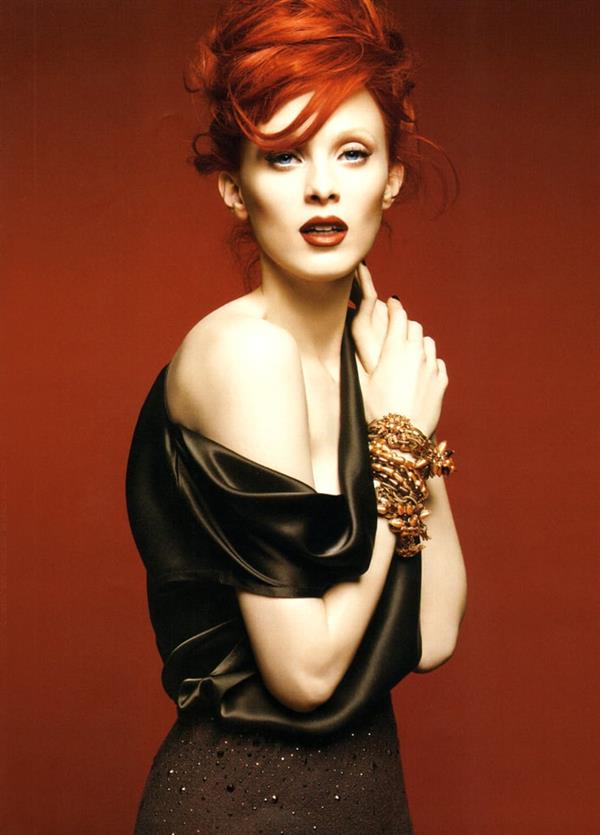 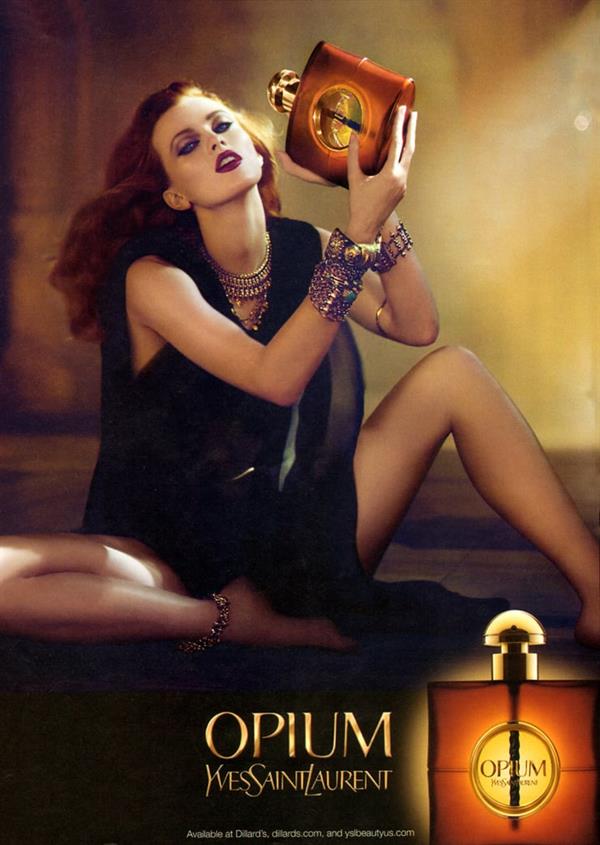 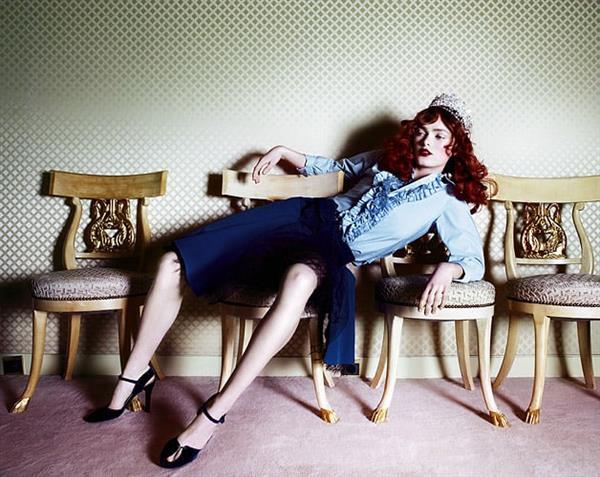 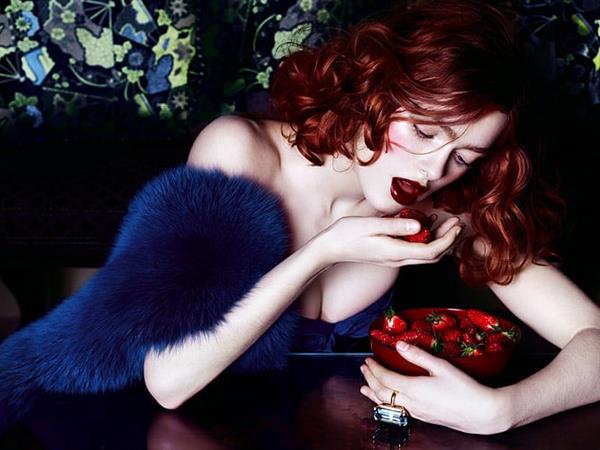 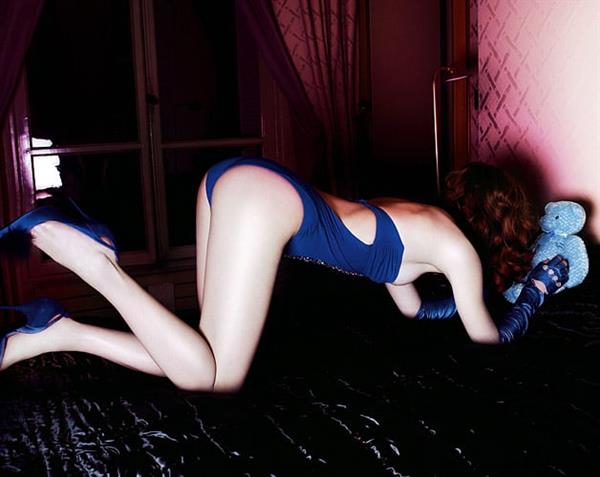 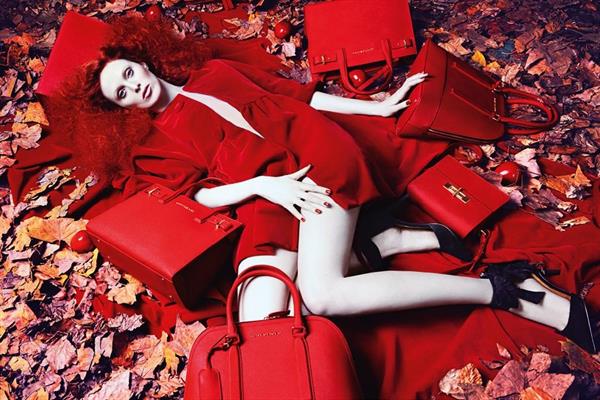 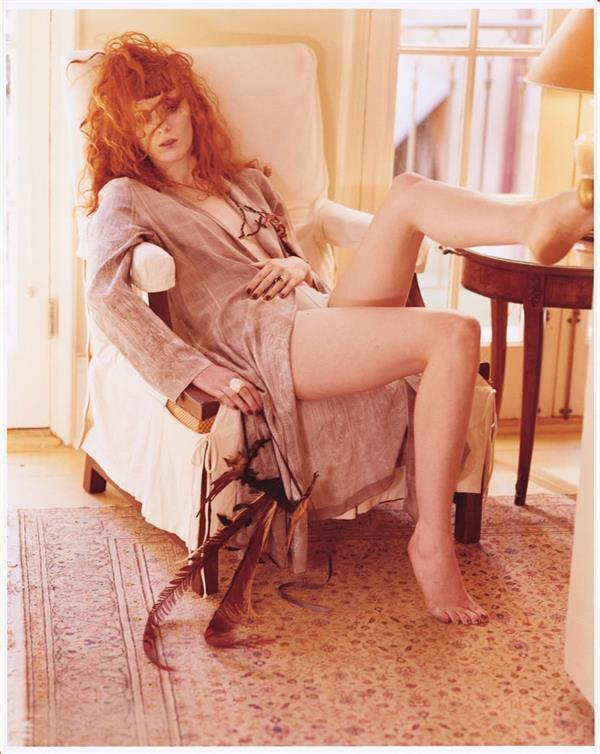 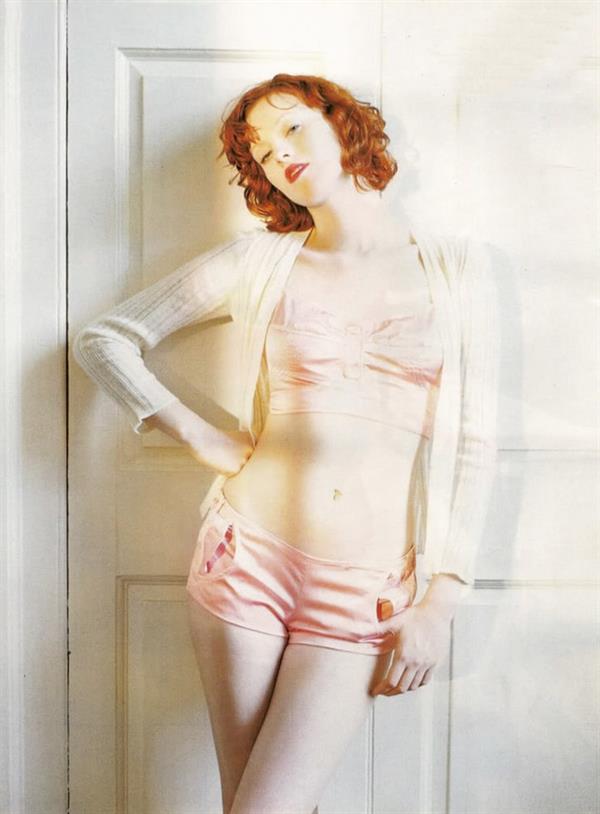 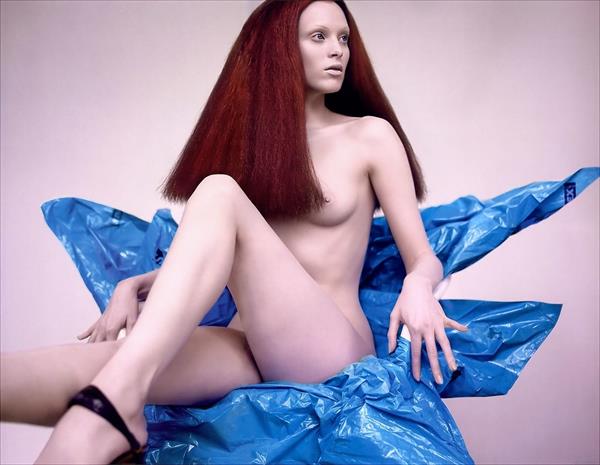 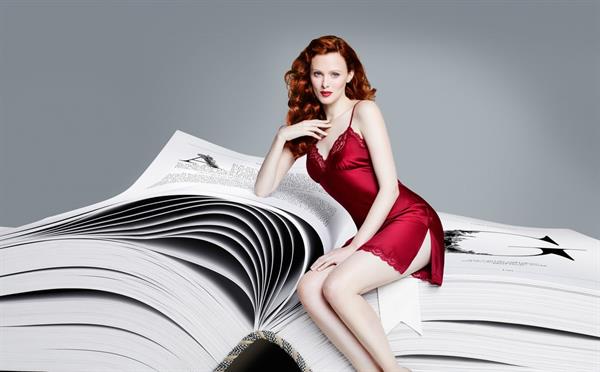